A Trip to Old Florida

Took a long ride out from my small town and found a reserve with lots of old FL to admire.  On the way back to the bike, I noticed the lighting was great, so I snapped this before we left for home.

Took this picture out on a ride a few weeks ago…

Usually on Sunday’s some folks head to a brick and mortar  place where they have mass, or some type of church.  Last Sunday I went to a Chrome Mass in Leesburg, Florida for their 18th annual Bike Fest ( leesburgbikefest.com ). I’ve visited a similar event Roar On The Shore ( roarontheshore.com)  in Erie, Pennsylvania and it was much the same but at a slightly bigger scale.  If someone needed anything for their motorcycles, you’d have no problem finding it – like most events I’d imagine it’s this way as well, this was only my second Chrome Mass to date.

The main idea for visiting this event was to get the dust off my camera and get behind it again.  I didn’t take as many as I had wanted to, but between texting a few pictures to my girlfriend and taking more with my Canon 60D, I did get a few interesting pictures.  I realized very quickly that most folks are “ok” with a picture taken with a smart phone, while have a lens pointed in their direction was a bit unsettling.  I learned from this event of what to take, when to take it, and what to take it with – this isn’t a crowd you’d want to look peculiar in snapping lots of pictures with a camera.  Moving on.

Following are some pictures that I snapped at the event.   Most notable were the red Ford trike and the gold custom-built by West Coast Choppers.  So many bikes to photograph, but I saved my SD card for the ones that stood at to me.   There some pink in here two, I’m always on the lookout for pink stuff that might make my girlfriend say “hmm, that’s kinda cute…”  Sadly she wasn’t there, but hopefully for the next bike fest she will be.

Hopefully you’ll enjoy looking at these as much as I did taking them. 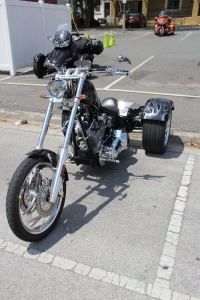 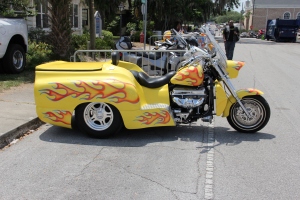 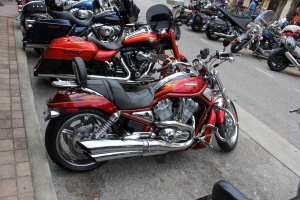 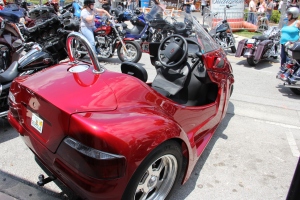 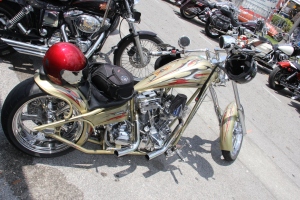 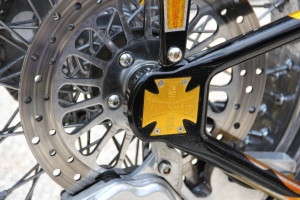 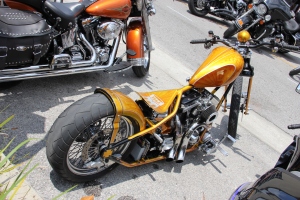 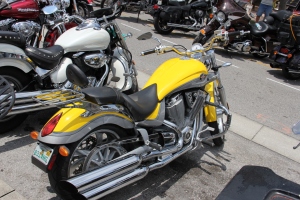 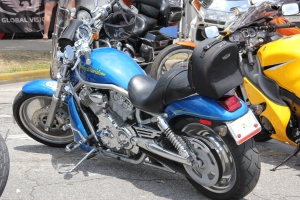 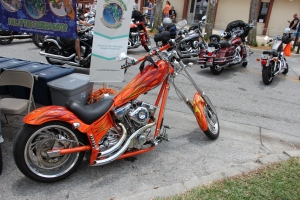 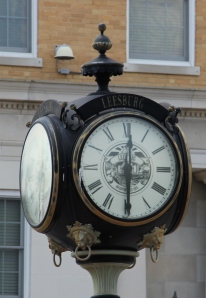 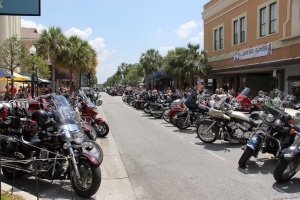 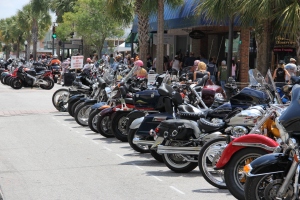 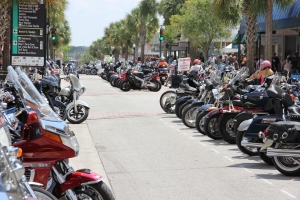 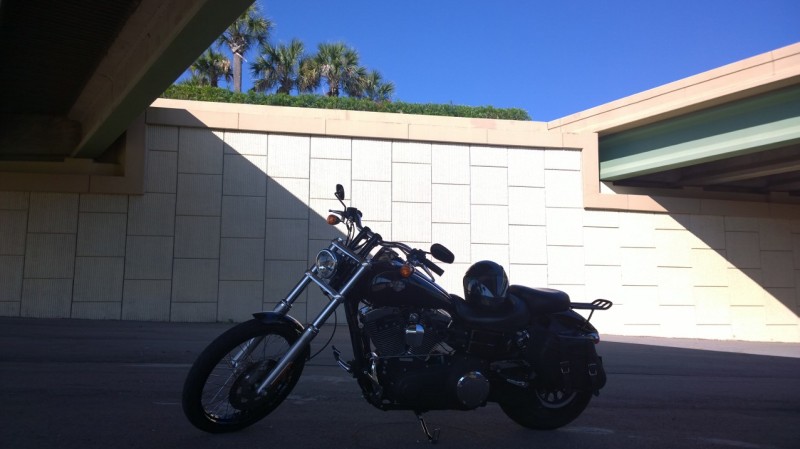 It’s not exactly a race, it’s the number of miles I’ve travelled in the last year on Black Beauty, my Harley Davidson.  This weekend marks the one year anniversary of when I purchased her (yes, it’s a girl).  I can safely say I’m just as excited to ride this bike now, as I was when I drove it home from the Harley Davidson (HD) dealership.

The experience.  It’s the dozens of people who walk over to me and say, “hey, nice bike – what is it?  We’d end up swapping digits, shaking hands, and feeling like we’ve known each other for a long time.  Some visits are short, some are a bit longer – but this was the first thing I noticed about riding this bike.  There are many who ride, used to ride, want to ride, or can’t ride – and they all love talking about a Harley, anytime.

The HD Family.  This family is huge, and growing.  There a lot of colorful people in the family no doubt, but they are all welcoming and friendly.  I’ve not met another rider or owner that wouldn’t stop and chat, offer a hand, or give some advice I’ve asked for.  The folks at the dealerships are even friendlier, but when you’re out about 100 or so miles from home, your bike is kind of your calling card.  It’s definitely a reflection of yourself – all the brothers and sisters in the family have rides that illustrate that.  And the coolest part about it is that you hardly ever see two bikes that looks the same – we’re all different and so are our bikes, but we all get along, mostly.

The gear and bike accessories.  Every new owner I’ve met has the same problem, they go crazy buying gear and upgrades for their bikes.  Harley’s aren’t hard to work on, but they’re not easy either.  When you order something you have to be sure you get the right parts or you can take your ride down.  And tools, are the same.  I’ve purchased a few specialty tools just for one update/upgrade and it just adds to the cost.  I met a young man at a gas/petrol station one afternoon on the way home from work.  His bike was the same year and model as mine, only he’d owned his about six months less than I had mine.  He spent a total of $3,000/£1850 on his bike and I really couldn’t tell until he started to unpack the updates one by one.  Oh, the HD fever runs rampant for a few months, and it doesn’t stop with the bike, it bleeds into clothing as well.  My girlfriend gets a new HD shirt every few weeks, they’re all very cool and look great on her.  The guys’ stuff, not so easy to fit in, but I’ve figured out how they size stuff, so I’m a bit more cautious and careful.  And yes, other members of my family are getting HD clothing items as well, but they love the style and look of the HD brand – no complaints yet.

No Fairing / Wind Screen.  I sit in front of screens all day long, so I decided on a model that has no wind protection – I am the wind screen.  It does add a huge dynamic to the ride for sure, but I get the full effect of nature (bugs included) when I’m riding.  Plus, its one less thing to clean.

Death.  There I said it.  Yes, there’s a chance I’ll get on my bike and not reach my destination.  But the way I fought that fear in the early days (< 2K miles) was with some advice my motorcycle riding instructor gave me.  She told me “You’re a good rider, but you still have to practice whenever you have the time.  I still do, and it’ll help with your confidence and might save your life.”  She was right. It has saved my life no less than six times already with specific things I practice at high and low speeds.  I’m not an idiot and I realize that the world is being disrupted and distracted when they’re in their cars.  You don’t need to be texting on your cell-phone to cause an accident.  You could be in a bad mood, or just in a weak state of mind and stop paying attention to how you’re driving.  That’s bad for me when I’m riding next to you.  Conversely, my riding instructor told us the same thing.  “Don’t get on your bikes if you’re upset, pissed off, depressed, or mad about anything.”  She was right.  I did it a few times and learned my lesson the easy way that keeping your head clear when you get on the bike will keep everyone safer, and alive.

Wow, this thing is heavy!  I’d say I was in pretty good shape, but I’ve dropped my bike a couple of times at very low speeds, or b/c of a random stall, and I couldn’t pick it up.  It’s not really balanced they way you’d think unless you’re up to speed on the highway.  So when it’s lying on its side, you have to pick up the entire weight of the bike.  This turned into a goal for me – I needed to get strong enough to pick up 700 lbs. / 320 kg.  I reached that goal and now I can.

I’ll close with this for those that haven’t had, or don’t want the pleasure of riding a motorcycle.  And when I say motorcycle I’m going to refer to the touring motorcycles, not the sports bikes – there’s a difference and I don’t mean any disrespect when I say that.

Riding a motorcycle is like dancing.  And yes, you have to get to know your partner very, very well – intimately in fact.  For every day there’s a thunderstorm, wind storm, full sun, or very low temperatures, your motorcycle behaves and reacts differently.  You have to understand each different reaction when you’re in different types of riding situations too, no two days are the same.   There’s a bit of an art to it, but somehow when you get off the bike your mind is a bit refreshed, like it is after a night of dancing.   If you ride, stay safe.

From this to this…

Rode Black Beauty in this morning since the stormed moved out, a glorious ride for sure.  We’ll still get a bit of rain in the afternoons, but nothing like yesterday.

Well, it’s not like she’s been off the road for a while but with all of the rain last week I just thought I’d be safer and not challenge the elements and wait.  And the wait was so worth it.  I mapped out a ride down yesterday morning with a burger stop in Lakeland – it was a great ride!  Here are the details: http://bit.ly/10dPXnJ  This should be a public page, sorry if it’s not but it may be b/c it’s part of the Harley Owners Group Ride Planner site.

About 1/2 way to Lakeland I had to stop to clean the love bugs off my helmet.  It was pretty bad, and nasty but ’tis the season here in Florida.  My bike was pretty covered in them as well but it just needs a quick bath and it’ll be good as new.  The ride was just over 100 miles and it was such a great day of riding.  Great for clearing out your mind and enjoying the beautiful state of FL.

Error: Twitter did not respond. Please wait a few minutes and refresh this page.